Dr. Larycia Hawkins Is At An Impasse After Her Suspension

Wheaton College, professor at impasse after her suspension 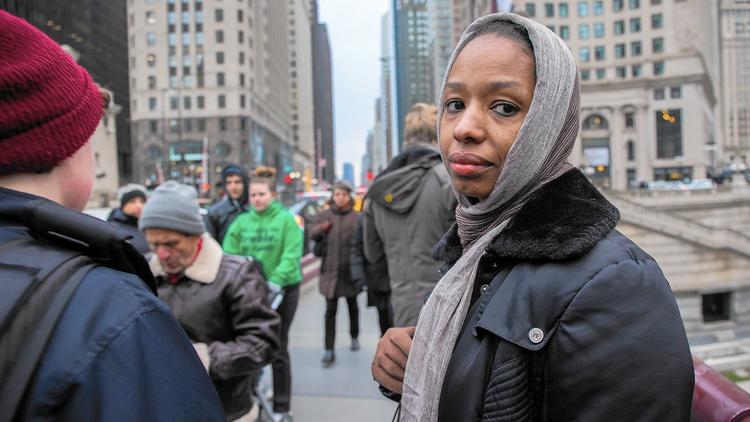 A Wheaton College professor suspended for saying Muslims and Christians worship the same God declared Tuesday that she would fight efforts by the private evangelical college to force her out.

Larycia Hawkins, a tenured political science professor who earlier this month demonstrated solidarity with her Muslim neighbors by wearing a hijab, said she will not accept a proposal offered by the college to teach again next fall that would revoke her tenure for at least two years. She said the college appears to be moving toward termination, meanwhile she has rejected suggestions to resign. 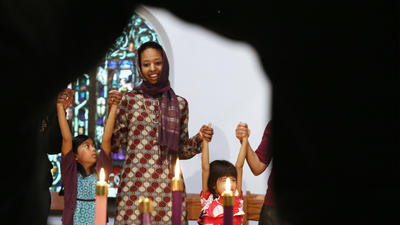 Larycia Hawkins, an associate professor of political science at Wheaton College who is Christian, is wearing a hijab, a traditional Muslim headscarf, throughout Advent as an act of "solidarity with my Muslim sisters." (Stacey Wescott / Chicago Tribune)


"I was naively thinking they wanted to cooperate," she said. "I have tenure, and I have to fight for that."

On Tuesday, Wheaton confirmed that conversations had reached a stalemate.


"Both parties are in discussions toward a final and comprehensive resolution," Wheaton College said in a statement. "Because of the arrival of the Christmas holidays, however, it will be some time before the contours of that resolution are solidified."

Hawkins, 43, announced earlier this month that she would don the hijab as part of her Advent devotion to show support for Muslims who have been under scrutiny since mass shootings in Paris and San Bernardino, Calif. 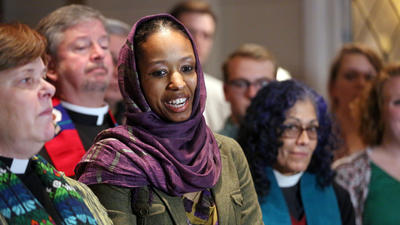 "I stand in religious solidarity with Muslims because they, like me, a Christian, are people of the book," she posted on Facebook. "And as Pope Francis stated last week, we worship the same God."

Though the college did not take a position on her wearing the hijab, some evangelical Christians said her statement should have spelled out what makes Christianity distinct from Islam. Not doing so put her in conflict with the statement of faith that all Wheaton faculty members must sign and live out, they said.

"While Islam and Christianity are both monotheistic, we believe there are fundamental differences between the two faiths, including what they teach about God's revelation to humanity, the nature of God, the path to salvation and the life of prayer," Wheaton College said in a statement.

The college placed her on paid administrative leave through the spring semester, pending a review. Both parties said last week they would work toward reconciliation. 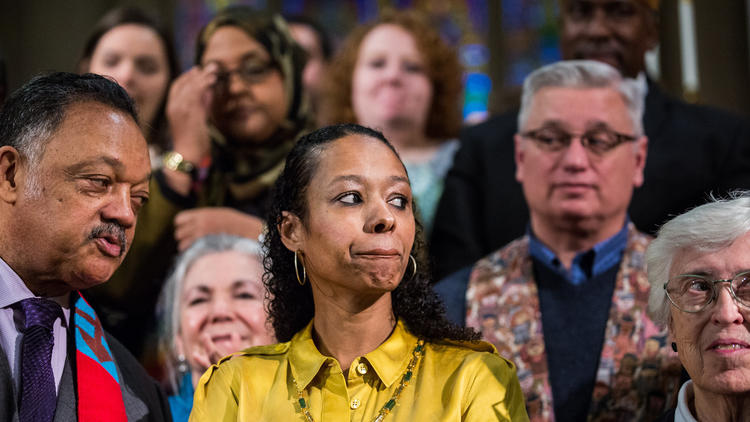 Wheaton College students, faculty and others held a sit-in to support Larycia Hawkins who, as part of her Christian Advent devotion, wore a hijab to show solidarity with Muslims. Her explanation for the gesture didn't sit well with the school. She has been placed on leave.


But this week, that review appears to have come to a close, Hawkins said. She said although her theological response, required as part of the review, seemed to satisfy the concerns of college Provost Stanton Jones, he told her he wants her to engage in more conversation with the college board of trustees before her tenure can be restored. Hawkins said she is done talking the finer points of theology. She no longer wants to answer questions about the sincerity of her faith.

"On the part of the College, further theological clarification is necessary before such reconciliation can take place, and unfortunately Dr. Hawkins has stated clearly her unwillingness to participate in such further clarifying conversations," the college said in a statement. "This represents an impasse on our efforts toward reconciliation."

Hawkins has been asked to affirm the college's statement of faith four times since she started teaching at Wheaton nearly nine years ago. She was first admonished for writing an academic paper about what Christians could learn from black liberation theology, which relates the Bible with the often-troubled history of race relations in America. Jones said Hawkins' article seemed to endorse a kind of Marxism.

She was called in a year later to defend a photograph someone posted on Facebook showing her at a party inside a home on Halsted Street the same day as Chicago's Pride Parade. Last spring she was asked to affirm the statement again after suggesting that diversifying the college curriculum should include diplomatic vocabulary for conversations around sexuality.

Last week, she faced questions a fourth time over her Facebook post that Muslims and Christians worship the same God. She said she was simply reiterating that there is common ground among the monotheistic Abrahamic faiths, which many theologians have said for centuries.

"What this intimates is I have no religious freedom to articulate my faith in a way that is wholly consistent with centuries of Christian theology and scholarship," she said. "But all of a sudden I say it and it's anathema."

Michael Hamilton, an associate professor of history at Seattle Pacific University, who has written extensively about the west suburban college, said Wheaton does not have a denominational affiliation but still wants objective guidelines to navigate difficult questions, he said. The statement of faith provides that road map, but there are unwritten rules too.

"There are some things that a person could say or do that, even though they're not proscribed in the statement of faith, they're nevertheless considered by keepers of the gate to be inconsistent," Hamilton said.

In an email to faculty Tuesday, Jones said the Hawkins case has raised awareness about the boundaries between one's professional and personal life, the effect and use of social media, academic freedom in the Wheaton community, and what it means to affirm and model the college's statement of faith and community covenant.

"Certainly these last 10 days have presented a series of challenges that have had ripple effects on our campus, across the nation, and across the world," Jones wrote. "Addressing these concerns has been extraordinarily complex, and the social and professional media contexts and resulting public reaction has considerably magnified and complicated understanding and resolving these issues."

"I may get nothing out of this," she said. "This is about standing up for my colleagues. If I can be thrown under the statement of faith bus, so can they. Everyone is cast under a cloud of suspicion. If they say the wrong thing, how does one know?"