Democracy and Human Rights in Egypt ... 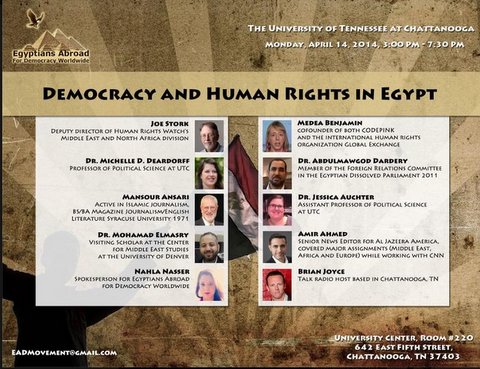 Medea Benjamin:
Medea Benjamin is the cofounder of the women's peace group CODEPINK and the human rights organization Global Exchange. She has written 8 books, the latest being Drone Warfare: Killing by Remote Control, and she has campaigned extensively against the use of killer drones. She has been involved in many campaigns around the Middle East, from supporting human rights activists in Bahrain to advocating for the release of Yemeni prisoners in Guantanamo to pressuring for women's participation at the Syria peace talks. She was in Egypt during the time of the revolution and has traveled to Egypt many times on her way to Gaza. Her latest attempt to go to Gaza was in March, when she had organized a 100-women global delegation to meet with Palestinian women for International Womens Day. The Egyptian authorities, however, stopped her at the airport, put her in jail and then violently attacked and deported her. Upon return, she has been very outspoken against the Egyptian military government and US government funds going to Egypt.

Joe Stork:
Deputy director of Human Rights Watch's Middle East and North Africa division, is a general expert on human rights issues in the region. Before joining Human Rights Watch in 1996, Stork co-founded the Middle East Research & Information Project (MERIP) and served as chief editor of Middle East Report, its bimonthly magazine. Author of numerous books and widely published articles on the Middle East, he has lectured widely at universities and public forums around the world. Stork served as a Peace Corps volunteer in Turkey and holds an M.A. in International Affairs/Middle East Studies from Columbia University.

Dr. Michelle D. Deardorff:
Dr. Michelle D. Deardorff is Professor of Political Science at UTC, coming to Chattanooga after previously teaching at Jackson State University (Mississippi) and Millikin University (Illinois). Her research and teaching have focused on constitutional law and political philosophy, with a particular interest in the idea of equality. Dr. Deardorff is a founding member of the Fannie Lou Hamer National Institute on Citizenship and Democracy, a coalition of academics who promote civic engagement and popular sovereignty through the study of the struggle for civil rights in the United States, where for the last 17 years they have taught students, teaching, university faculty and the community about the ways in which local citizens struggle for change and have transformed the definition of democracy.

Dr. AbdulMawgoud Dardery:
- Ph.D. Cultural Studies (Euro-centrism vs. Islamism) University of Pittsburgh, USA, 2000.
- Represented Dr. Saad Al-Kattani in the Moderation conference held by the ruling party (UMNO) in Malaysia, Nov. 2013.
- Delivered President Morsy’s letters of condolences to the family of Mr. Mandela and the president of South Africa, December, 2013.
- A spokesperson for the Anti-Coup, Pro-Democracy National Alliance, Egypt. A spokesperson of the Foreign Relations Committee (FJP, Egypt).
- A founding member of “Parliamentarians against the Coup”.
- Senior advisor to the newly established Luxor Islamic Center for Global Dialogue.
- Member of the Foreign Relations Committee, dissolved Egyptian Parliament 2011.
- Member of the Tourism Committee, dissolved Egyptian Parliament 2011.
- Member of the dissolved Egyptian Parliament 2011.
- Professor of English and Cultural Studies.

Dr. Jessica Auchter
Dr. Jessica Auchter is Assistant Professor of Political Science at the University of Tennessee at Chattanooga. She teaches courses on international politics, including genocide and humanitarian intervention, and American foreign policy. She received her PhD from Arizona State University, and her research specializations are post-conflict reconstruction and memorialization.

Amir Ahmed:
An Emmy award-winning journalist with 17 years of experience in international news production and newsgathering. He has taken leadership roles within CNN and was recognized for his reporting out of Egypt and Libya during the 2011 revolutions. He also covered major assignments across the Middle East, Africa and Europe. Last year, Amir joined Al Jazeera America to be a member of the core group that launched the channel in New York. He currently works as Senior News Editor for Al Jazeera America.

Dr. Mohamad Elmasry:
Dr. Mohamad Elmasry is a Visiting Scholar at the Center for Middle East Studies at the University of Denver and an incoming Assistant Professor in the Department of Communications at the University of North Alabama. In 2009, Dr. Elmasry received his PhD in Mass Communication from the University of Iowa, where he was a Presidential Fellow. His PhD dissertation examined constraints on news production in Egypt. Dr. Elmasry held assistant professorships at Qatar University and the American University in Cairo from 2009 – 2014. His research has appeared in reputable refereed publications
and focuses on the sociology of news, Arab press systems, and news coverage of the Israel-Palestine conflict. Dr. Elmasry is also a political and media analyst and has appeared regularly on international television news networks, including CNN, The BBC, and Al-Jazeera English.

Brian Joyce
Brian Joyce is a talk radio host based in Chattanooga, TN. He can be heard every Monday through Friday, 1-4 pm EST on Talk Radio 102.3 FM. He is a featured blogger on Huffington Post, he covered the Rally to Restore Sanity for AOL Television, and his voice work has been featured on the Cartoon Network.