An elderly deaf Oklahoma man was beat by two highway patrol troopers earlier this month for allegedly refusing to comply during a traffic stop. 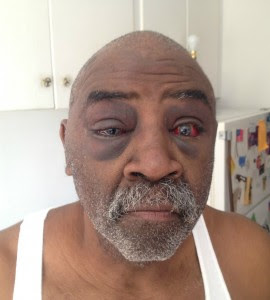 According to reports, 64-year-old Pearl Pearson left the scene of a minor automobile accident before being pulled over by Oklahoma Highway Patrol troopers on January 3.

After issuing several vocal commands from their police vehicle, troopers claim Pearson refused to show his hands. Despite a large placard on his driver’s door stating, “Driver is deaf,” Pearson claims troopers immediately began hitting his face as he attempted to show his ID, which also states that he is hearing-impaired.

After a seven-minute altercation, Pearson was arrested and charged with resisting arrest and leaving the scene of an accident. According to Pearson, he was denied an interpreter for the entire duration of his detainment in and out of jail.

“Not during the booking, hospital, or time at the jail was an interpreter provided, even though Pearl requested one,” a statement reads.

Another statement on PearlPearson.com reveals that Pearson has several family members in law enforcement, making it seem highly unlikely that Pearson would cause issues for police.

“Pearl’s own son is a police officer, as was his son-in-law, who is now a deputy sheriff. He respects law enforcement and knows how to respond when pulled over. There is no reason for someone like Pearl to be hurt like this by those who are meant to protect and serve,” the statement reads.

Sacia Law, Pearson’s next-door neighbor, also agreed that there must have been a major misunderstanding during the traffic stop.

“He’s hearing impaired, you can’t yell at him from behind his car and get a response,” Law told Fox 4. “I know they do dangerous jobs and they put their lives on the line, but that is over the top.”

Despite the obvious misunderstanding, the highway patrol claims they are going forward with the charges while a review of the incident is conducted. The police affidavit made no mention whether or not the troopers realized Pearson was deaf.

Pearson is now receiving financial help from the Total Source for Hearing-Loss and Access group, an agency which provides assistance to the deaf and hard of hearing. A benefit dinner has been scheduled for Thursday at the Garnett Assembly of God church in Tulsa from 5-7 p.m.

Unfortunately, an increasingly violent militarized police force has created a real danger for not only the public, but the country’s countless Constitution-abiding officers.