Angola prisoner Herman Wallace is dying of liver cancer after 42 years in solitary confinement. A member of the 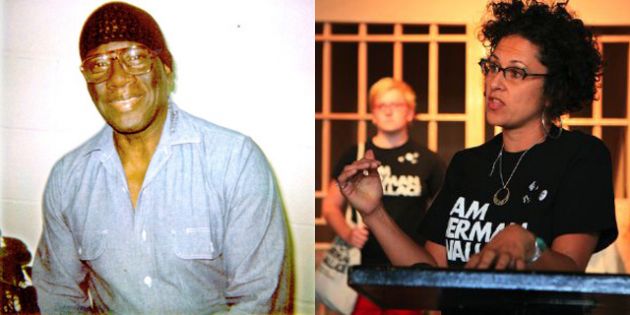 so-called Angola Three, Wallace and two others were in jail for armed robbery, then accused in 1972 of murdering a prison guard at the Louisiana State Penitentiary, known as Angola prison. The men say they were framed because of their political activism as members one of the first prison chapters of the Black Panther Party. Wallace’s supporters say he has just days to live, but his requests for compassionate release has so far gone unanswered. We speak with Jackie Sumell, a New Orleans-based artist behind "Herman’s House," a collaboration with Wallace, which is the subject of a new documentary by the same name. "I’m not sure in the state of Louisiana if compassion is part of the vocabulary of those who are in power. I always felt that compassionate release, or asking for compassionate release, was important in terms of a multipronged effort to have Herman released," Sumell says. "But there’s been 42 years of the state continuing to deny Herman’s due process. It’s incredible. He’s the longest known serving in solitary confinement in the United States." We are also joined by Malik Rahim, one of the founders of the Louisiana chapter of the Black Panther Party and a co-founder of the Common Ground Collective, which helped bring thousands of people from all over the world to help rebuild New Orleans after Hurricane Katrina.

AMY GOODMAN: We’re on the road in New Orleans, Louisiana. We’re broadcasting from New Orleans Public Television station WLAE. We turn now to look at the case of a man who’s spent more than 42 years in solitary confinement in Louisiana, believed to be one of the longest-serving prisoners who served on death row for that amount of time. He is dying now of liver cancer. His supporters are pleading for his compassionate release.

I’m talking about Herman Wallace, a member of the so-called Angola Three. He and two others were in jail for armed robbery, then accused in 1972 of murdering a prison guard at the Louisiana State Penitentiary, known as Angola. The men say they were framed because of their political activism as members one of the first prison chapters of the Black Panther Party. Herman Wallace is now 71 years old in the late stages of liver cancer. Robert King Wilkerson was released in 2001 after 29 years in solitary confinement. The third of the Angola Three, Albert Woodfox, remains in prison and says he’s been subjected to strip searches and anal cavity searches as often as six times a day.

Well, as Herman Wallace faces the end of his life, we’re joined now by two people. But first I want to turn to a clip from a new film about Herman’s collaboration with one of our guests. Twelve years ago, artist Jackie Sumell began writing to Herman Wallace, and one day she asked him, "What kind of house does a man who has lived in a six-foot-by-nine-foot box for over 30 years dream of?" Wallace wrote back with a description, and soon afterward Jackie made a commitment to build the house so Herman could either live in it upon his release, or so it could serve as a symbol of survival and hope. The two have often spoken by phone in between their visits, though Herman is now too weak to speak anymore. The calls are part of the story documented in a new film called Herman’s House that just premiered on PBS on POV. In this clip, it was Herman who comforts Jackie after the Louisiana Court of Appeals just turned down his latest appeal.