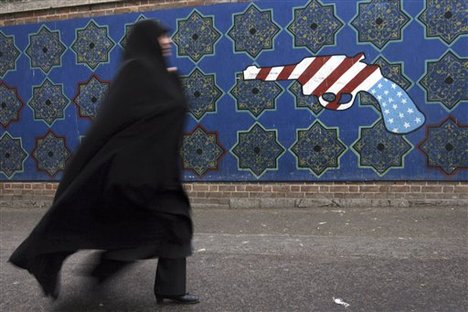 "I tore out their tongues and defeated them completely, the others, still alive, I smashed with the very same

assassinated in Babylon-finally a belated burial sacrifice for his soul. I fed their corpses, cut into small pieces, to the dogs, pigs, zibu-birds, vultures, the birds of the sky and to the fish of the ocean."(1)

This account of siege warfare and its aftermath by King Assurbanipal came to mind when Iran recently called U.S.-led sanctions against its nation "pathetic," "confused acts," and an attempt to bully and intimidate its people. For some, it was only yesterday when Iran was a corporate-military outpost of the United States Empire. Even as President Carter was promising "the basic right of every human to be free of poverty, hunger, disease, and political repression,"(2) the Shah's CIA-trained and armed troops were machine-gunning Iranians in Jaleh Square. After hundreds of innocent people were killed and wounded, the Shah thanked the U.S. for "this move towards democracy."(3) (A move which would become a sophisticated siege after Iran's Islamic revolution!)

So in 1979 when the people of Iran overthrew this move towards U.S.-styled democracy and instead, embraced an Islamic republic, the U.S. refused to accept such a defeat, that is, the loss of another colonial holding and an alternate democracy. The U.S. not only helped instigate the Iraq-Iran War (1980-87) and the U.S.-Iran Tanker War (1980-85), but it is now training and arming rebels and terrorist groups inside and outside of Iran. Although siege warfare means the art of capturing cities and fortresses by means of a partial or total blockade followed by a systematic reduction including assaults, psychological warfare, and spreading diseases(4); can the same be applied to sophisticated, modern-day sanctions that basically serve the same purpose and the same ends?

In ancient times, siege warfare usually developed into mistrust and hatred between the besieged and the besiegers. While the besieged developed reinforced walls and artificial obstacles, not to mention a deep resentment, the besiegers sought total domination with advanced engineering techniques. Conquering armies built massive assault machines like battering-rams, fighting-towers, and catapult-missiles. If sappers, ramparts, climbers, or artillery barrages failed to breach the gates, besiegers would catapult dead or decapitated bodies over walls to spread diseases. Fire-flaming arrows , to spread panic, were used too. In some instances, even rivers were diverted to starve the defenders into submission. If the besiegers were successful, plundering, pillaging, destruction, and death often ensued.

Whether it be the U.S.-led sanctions against Iran, Cuba and North Korea or the Israeli-led sanctions against the people of Gaza, one could argue that sanctions are a type of modern and civilized-kind of siege warfare, especially when considering the final result: subjection, exploitation and supremacy. For years, Cubans have had to suffer from shortages of food, medicines, and technologies, along with travel restrictions. Due to Israeli sanctions against Gaza, eighty percent of the people are dependent on aid. And while children suffer from malnutrition, some food items and basic necessities like medicines, electricity, construction material, and mechanical parts for industries are blacklisted or banned, as they now are in Iran.

Since provisions like petroleum, industrial parts, and some foods and medicines-including cultural and educational exchanges and financial institutions and investment firms for the purpose of economic development-are now directly or indirectly affected, was a member of Iran's parliament correct in stating that U.S.-led sanctions against Iran are a declaration of war? After all, besiegers must spend enormous amounts of thought, time, resources and money to plan and prepare their attacks. But siege warfare can backfired-as can sanctions-causing the invading armies to retreat, even leading to the collapse of the besiegers own civilization. Surely, the engineering that has remained an extension of siege warfare, and the ingenuity that goes into sanctions, could be better utilized in initiating open dialogue and making peaceful overtures to Iran.

The U.S. could actually learn from Iran's rich and diverse history, specifically in regards to King Cyrus who displayed ingenuity against the walled defenses of Lydia. He did not have the siege skills and would have been forced to retreat, except one day he noticed a Lydian defender climbing down from the walls to retrieve his helmet. He observed the soldier's route back-up the wall, which they did, and the city was taken. Cyrus treated the Lydians with mercy and Lydia willingly became a Persian province.(5) On hearing about this, and due to their own corrupt and abusive leaders, when Cyrus laid siege to Babylon, there was little resistance among the people. When he entered Babylon, branches were placed at Cyrus' feet and he proclaimed peace to all men, forbade looting, allowed religious toleration, and promised payment for those who had suffered under the prior regime.(6)

Not only are the U.S.-led sanctions against Iran a kind of modern siege warfare for the purpose of subjugating and homogenizing its people, but they are retaliatory in nature and very hypocritical. Under U.S. control, the Shah had been America's best customer, buying more than $10 billion in lethal technology, including air-to-air missiles, smart bombs, and aerial tankers-"everything but the atomic bomb,"-according to a State Department official. Amnesty International reported that the Shah presided over a 20,000 man secret police apparatus, had eliminated civilian courts, held 100,000 political opponents in jail, and carried out more official executions than any other country in the world.(7)

After massacring peaceful Iranian demonstrators in Jaleh Square, the Shah's ambassadors asked Washington with regard to its appetite for terror: "Would you accept five thousand deaths? Ten thousand? Twenty thousand?"(8) The same questions need to be raised today about deadly sanctions. Can battering rams and assault ladders turn into peace initiatives and words of goodwill? Can fighting-towers and ramparts develop into ambassadors and bridges of peace and understanding? Will aid to sappers-who attack randomly and bomb innocent civilians-end? When will flaming-arrows that cause fear and panic, or dead bodies catapulted over walls that leads to sickness, be eliminated? Will rivers that provide drink and food for the thirsty and hungry, never again be used as weapons of war?

Whether it be ancient siege warfare or modern sanctions, the ends have always been the same: the arrogant and self-indulgent desire to dominate and conquer a city, fortress, or entire nation. But just as King Cyrus observed and discovered, there are much better ways and avenues in establishing peace with justice and security. After three decades of modern and sophisticated siege warfare against Iran, including the cost of billions of dollars and thousands of lives, one has to wonder if the U.S. and its political and military leaders will ever learn this valuable lesson.