An Evening With H.E., Dr. Hassan Rouhani President Of The Islamic Republic Of Iran ...

An Evening With H.E., Dr. Hassan Rouhani President Of The Islamic Republic Of Iran 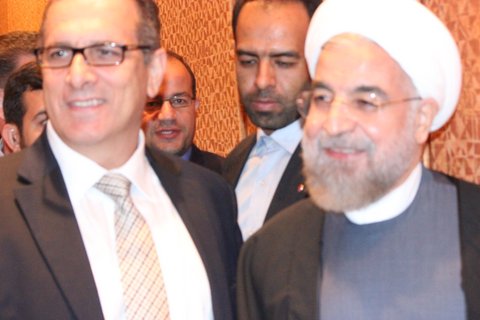 
Photo Gallery, View And Purchase Photos You Like: http://bilalmahmud.zenfolio.com/p624952697

Addressing the 69th annual session of the United Nations Assembly in New York on Thursday, Rouhani said extremism is a global phenomenon which has been fostered by certain countries which are now unable to fight it.

Noting that extremism and terrorism have turned into a global phenomena, Rouhani said, “All countries that have played a role in creating these terrorist organizations, should own up to their mistake and apologize,” not only to the past, but also to future generation.

According to Rouhani, wrong policies adopted by some Western states have turned the Middle East as well as Central Asia and Caucasus into a “paradise for terrorists.”

Rouhani further stated that the most painful point about current terrorism is that terrorists are beheading people and killing innocent civilians under the name of religion while all divine religions are essentially against violence and extremism.

This is a strategic mistake if some countries are trying to consolidate their domination over the Middle East region under the pretext of fighting terrorism because regional countries can fight terrorism in the region on their own, Rouhani said.

“If other countries really want to fight terrorism, they should help regional countries in their effort to do this,” Rouhani added.

He also advised regional countries to note that all of them are in the same boat and need coordination and cooperation to fight regional issues.

He noted that negotiations between Iran and the P5+1 group of countries have fared successfully in past months and will hopefully reach a comprehensive agreement within the deadline set for this purpose.

“Reaching a comprehensive nuclear deal with Iran is a historic opportunity for the West to prove it is not against the progress and development of other [states],” said Rouhani, adding that a final agreement could convey a “message of peace” to the world.

“A final deal on Iran’s peaceful nuclear program could be the beginning of collective cooperation aimed at the promotion of security, peace and development in the region and the world,” said the Iranian president.

Rouhani further stated that the Islamic Republic has abided by its commitments, though the other parties have sometimes taken steps in the opposite direction.