Amiri Baraka, one of the most influential African American writers of his generation, who courted controversy as a poet

, playwright and provocateur and who was a primary intellectual architect of the Black Arts movement of the 1960s, died Jan. 9 at a hospital in Newark. He was 79.

Newark Mayor Luis Quintana and other public officials confirmed the death. The cause was not reported, but Mr. Baraka had been hospitalized in intensive care since December.

Mr. Baraka began writing in the 1950s under his original name, LeRoi Jones, as a poet and jazz critic on the fringes of Beat Movement in Greenwich Village. He later became a disciple of Malcolm X and an advocate of a militant black separatist movement built around African American cultural traditions, racial pride and defiance.

He courted controversy throughout his life, first with confrontational plays in the 1960s, including “Dutchman” and “The Toilet,” that portrayed racial misunderstanding and violent encounters in explicit language.

Closely identified with the rising black nationalist movement of the 1960s, he later moderated his views and became an avowed Marxist. Yet he remained an unrepentant and polarizing symbol of radical indignation.

“We want poems that kill,” he wrote in “Black Art,” an influential 1965 poem that helped define the Black Arts movement. “Assassin poems. Poems that shoot guns. Poems that wrestle cops into alleys . . . setting fire and death to whities . . . ”

In a 1984 review of Mr. Baraka’s “The Autobiography of LeRoi Jones” in The Washington Post, novelist John Edgar Wideman summed up his protean place in American culture: “Savior, clown, artist who’d sold out to demagoguery, hero, menace.”

As much as anyone, Mr. Baraka helped define a modern, militant sense of self-identity and empowerment among African Americans seeking to break free of white cultural and social norms. The title of his 1967 one-act play became a catchphrase of the time: “Arm Yourself or Harm Yourself.”

In 1965, he founded the Black Arts Repertory Theatre in Harlem, N.Y.,. which received funding from the U.S. Office of Economic Opportunity. When OEO Director R. Sargent Shriver Jr. tried to visit the cultural center, Mr. Baraka barred him at the door.

“I don’t see anything wrong with hating white people,” Mr. Baraka told U.S. News & World Report at the time. “Harlem must be taken from the beast and gain its sovereignty as a black nation.”

Mr. Baraka’s forthright use of black vernacular, slang and profanity in an improvisatory style became an influence on later writers, hip-hop musicians and playwrights.

Arnold Rampersad, the biographer and literary critic, once wrote that Mr. Baraka’s bold writings, coupled with his vibrant social activism, made him one of the most historically significant figures in African American life, alongside Frederick Douglass, Langston Hughes, Zora Neale Hurston, Richard Wright and Ralph Ellison.

“More than any other black poet,” Rampersad wrote, “he taught younger black poets of the generation past how to respond poetically to their lived experience, rather than to depend as artists on embalmed reputations and outmoded rhetorical strategies derived from a culture often substantially different from their own.”

Mr. Baraka’s detractors considered him a reckless agitator whose inflammatory rhetoric contained elements of anti-Semitism and misogyny and constituted a reverse form of hate speech.

In 2002, cultural critic Stanley Crouch ridiculed Mr. Baraka’s writing as “an incoherent mix of racism, anti-Semitism, homophobia, black nationalism, anarchy and ad hominem attacks relying on comic book and horror film characters and images that he has used over and over and over.”

In later years, Mr. Baraka continued to issue incendiary pronouncements, including the poem “Somebody Blew Up America,” written soon after the terrorist attacks of Sept. 11, 2001.

In the poem, he maintained that Israeli and U.S. leaders had advance knowledge of the attacks. After reciting a litany of wrongs committed against the poor and powerless, Mr. Baraka wrote:

“Who knew the World Trade Center was gonna get bombed / Who told 4,000 Israeli workers at the Twin Towers / To stay home that day / Why did [Israeli Prime Minister Ariel] Sharon stay away?”

The passage was widely condemned as anti-Semitic and factually untrue and led to a public outcry to have Mr. Baraka fired from his $10,000-a-year position as poet laureate of New Jersey.

“I will not apologize, I will not resign,” Mr. Baraka said.

The state’s governor at the time, James McGreevey, discovered that he didn’t have the authority to dismiss Mr. Baraka. The legislature eventually passed a measure to abolish the post of poet laureate. His lawsuit against state officials was ultimately turned down by the U.S. Supreme Court.

In a wry moment of self-promotion, Mr. Baraka said, “No poet laureate has ever made poetry this famous.”

Everett LeRoy Jones was born Oct. 7, 1934, in Newark. His father worked for the post office, and his mother was a social worker.

He attended Rutgers University in New Jersey and Howard University without getting a degree and began to go by LeRoi Jones. He then served in the Air Force, which he found an alienating experience, marked by racial prejudice and conformity to rules he could not abide.

By the mid-1950s, he landed in Greenwich Village, where he befriended poet Allen Ginsberg, a fellow Newark native, and other writers of the Beat Movement. He soon gained a following for his own poetry and writings on jazz.

In 1964, he wrote several short plays, most notably “Dutchman,” that challenged accepted views of black-white relations. In “Dutchman,” which won an Obie award for best off-Broadway play, a bohemian white woman and a well-dressed black man have an encounter on a subway that ends in violence.

After the assassination of Malcolm X in 1965, Mr. Baraka said he “began to focus on my own identity.” He divorced his first wife, Hettie Cohen, with whom he had two children, moved to Harlem and later to Newark. In the late 1960s, he adopted the name Amiri Baraka.

Mr. Baraka became a tenured professor at the State University of New York at Stony Brook and taught at many other colleges, including George Washington University.

In 1980, he published an essay in the Village Voice in 1980, “Confessions of a Former Anti-Semite,” in which he renounced the overt anti-Semitism of some of his writings from the 1960s.

But he hardly retired from the cultural battlefield. He quarreled with prominent black mayors of Newark, including Kenneth Gibson and Cory Booker, and in the early 1990s had a well-publicized dispute with director Spike Lee, then making a film about the life of Malcolm X. He feared the effort would be tainted by the money and tastes of Hollywood.

“Who appointed Baraka chairman of the African American arts committee?” Lee retorted. “Nobody tells him what poems and plays to write, so why is he trying to tell me what kind of film to make?”

Mr. Baraka’s survivors include his wife of 47 years, Sylvia Robinson, who later changed her name to Amina Baraka; two daughters from his first marriage and four children from his second, including Newark city council member Ras Baraka.

Amiri Baraka’s daughter Shani and her companion were killed in 2003; the ex-husband of Shani’s sister was later convicted of the murders.

Mr. Baraka’s writings became more fragmented over the years, but he earned good reviews with his collected poems, “Transbluency,” in 1995 and with his 1984 autobiography. In that book, he described his early life and seemed to come to reluctant terms with the world around him.

“I realized,” he wrote, “that the U.S. was my home. As painful and complicated as that was.” 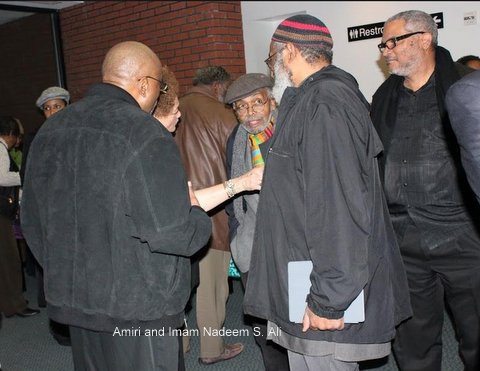 Find more photos like this on Oppressed Peoples Online Word