"When the oak is felled the whole forest echoes with it fall, but a hundred acorns are sown in silence by an unnoticed breeze." 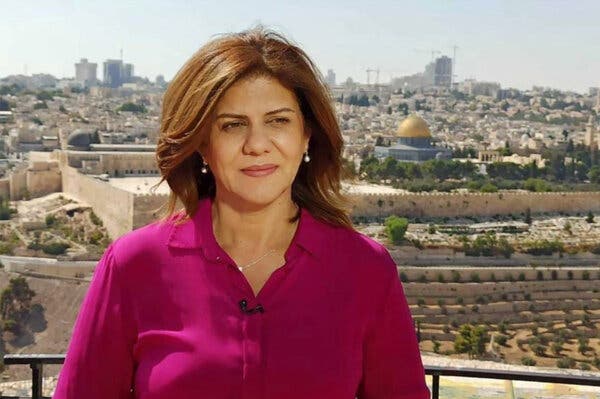 JERUSALEM — A journalist for Al Jazeera was fatally shot in the West Bank city of Jenin early Wednesday, the news network and the Palestinian health ministry said, blaming Israeli forces for her death.

The circumstances surrounding the shooting of the journalist, Shireen Abu Akleh, a Palestinian American, were not immediately clear but it happened during clashes between the Israeli military and Palestinian gunmen in the city. Al Jazeera, citing the health ministry, said the journalist had been shot in the head by Israeli forces during a raid.

I haven't personally gotten over the shock of the cold blooded murder of Shireen Abu Akleh. Having watched her reporting so much, I feel like I knew her. Watching videos of her lifeless body being dragged by a helpless colleague, and her face practically removed by the sniper bullet was gruesome. I can't imagine the pain of her family and friends (some of whom I've spoken to). So I first want to extend condolences to them, as well as the families of other journalists gunned down by the occupation.

The fact that Israel, now deemed an apartheid state by practically every human rights organization in the world, continues to act with this level of impunity is disgusting. The worst part of it all is that it is being enabled by US funding and cover, and now normalizing Arab and Muslim entities that serve to silence the Palestinian voice.

This is the most aggressive phase of ethnic cleansing, settlement expansion, harassment of worshippers in Jerusalem, and silencing dissent we have seen. What other country can bomb media buildings to the ground, and still have those outlets (looking at you AP) cover for their crimes? What other country can shoot journalists in the face and have the United States merely issue calls for investigation by the responsible illegally occupying force all while continuing to pledge unconditional support to the apartheid regime?

So let me be clear, we cannot wait on morally bankrupt US politicians, Arab/Muslim regimes that have sold us out, or those who pretend to be allies against hate yet enable its most brutal form against us in Palestine to figure this out. They can't shoot us all in the face, and they certainly can't render the whole world blind to their war crimes.
https://www.businessinsider.com/ilhan-omar-calls-for... 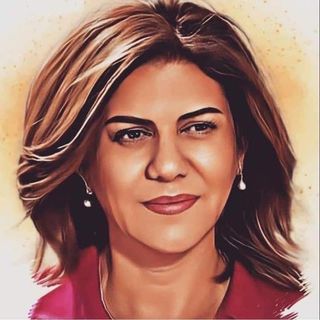 lsarsour
May 11, 2022
Shireen Abu Akleh was one of the most brilliant, brave and courageous voices in journalism. She is Palestinian AMERICAN and helped us stay connected to the pain, trauma and joy of the Palestinian people. She wasn’t afraid to do her job because she knew that sacrifice would come with centering an occupied people and she was willing to put her own life on the line to do that.

According to her colleague, she was murdered by an Israeli sniper that hit her in her ear just where her helmet was not covering. She was wearing a blue vest that said PRESS. Every journalist, every where in the world must be protected so they can bring us the facts. Shireen didn’t see journalism as her job, she saw it as her responsibility.

Today is a devastating day. Not only for Palestinians, but for all of us. All around the world. We cannot and should not ever be silent in the face of injustice.

Sending love and prayers to journalists in the middle of the storms. Sending love and solidarity to our beloved Palestinian people. A new generation of journalists and truth tellers will RISE UP. I have no doubt that Shireen’s honorable legacy will live on.

Comment by Bilal Mahmud المكافح المخلص on May 12, 2022 at 6:22am
Turn your rage in to empowerment of Palestinian women pursuing careers in journalism with a specific passion to bring justice and truth to the Palestinian narrative and reality. Many young women in Palestine have dreamt to grow up and be the next Shireen Abu Akel but because of a lack of financial ability haven’t been able to pursue that dream, until now.
We won’t just mourn. We won’t just post. We will rise to the occasion and invest in the future of Palestinian journalism.
Shireen’s legacy will live on. One beloved journalist, down - dozens more will RISE.

Shireen dedicated her life to exposing Israeli military violence — and it is ultimately what killed her. She revealed

Israel’s policy of letting its soldiers get away with murder — which is currently leading it to fabricate lies about her own targeted assassination. And she did all of this in an incredibly hostile, biased, dishonest media landscape that reports Israel’s lies as facts and erases Palestinians’ truths — now, including the truth of her own killing.

The entirety of Israeli and Western media: face facts. Multiple eyewitness accounts tell us an Israeli sniper directly targeted Shireen while she was covering an Israeli military raid in Jenin, a Palestinian refugee camp. She was wearing a press vest and a helmet, and the sniper shot her with extreme precision, near her ear, where the helmet didn’t cover. This was a targeted assassination.

The sniper’s murder of Shireen is part of a larger pattern of Israel eliminating Palestinian journalists, the people who speak truth to power and expose Israel’s crimes to the world. Since 2000, the Israeli military has murdered 55 Palestinian journalists, whom it views as being “armed with cameras” (as military spokesperson Ran Kochav said of Shireen today). The Israeli sniper killed Shireen not despite her being a journalist, but precisely because she is one.

We call for justice for Shireen, as we do with ALL murdered Palestinians, by demanding the US government end its $3.8 billion in annual funding to the Israeli military. Like Omar Asad, an elderly Palestinian whose egregious murder by the Israeli military was gravely misreported by the same news outlets earlier this year, Shireen is an American citizen. The Biden administration cannot ignore this — and we won’t let them. As Congresswoman Rashida Tlaib tweeted, “@POTUS, whether you’re Palestinian, American or not, being killed with U.S. funding must stop.”

“I chose journalism to be close to people. It may not be easy to change the reality, but at least I was able to make that voice heard in the world.” - Shireen Abu Akleh