Akwantu: The Journey is a fi lm which chronicles the history of the legendary Jamaican Maroons 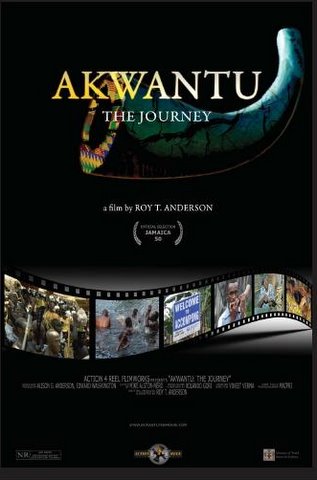 Akwantu: The Journey is a fi lm which chronicles the history of the legendary
Jamaican Maroons, rebel slaves of West African origin who defeated the British and
formed autonomous communities in the rugged and remote interiors of Jamaica.
The descendants of these communities still maintain their proud heritage today.
RSVP to history@gsu.edu. This event is free and open to the public. Visit
gsu.edu/directions.html for driving directions or gsu.edu/map.html for a
campus map.
This event is co-sponsored by the Department of History, the
Anthropology Club, Center for Latin American and Latino/a
Studies, Association of Historians at Georgia State University,
and Phi Alpha Theta.
When: Friday, March 16, 2012, 6:00 p.m.
Where: Georgia State University’s General Classroom
Building (GCB) Room 200
Contact: Dr. Harcourt Fuller - hfuller@gsu.edu
Special Sneak preview film screening 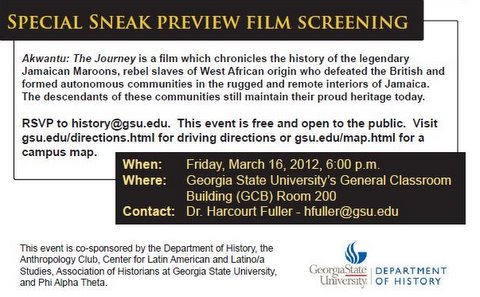 the mountainous interior of Jamaica during the long era of slavery in the island. African slaves imported during the Spanish period may have provided the first runaways, apparently mixing with the Native American Taino or Arawak people that remained in the country. Some may have gained liberty when the English attacked Jamaica and took it in 1655, and subsequently. For about 52 years, until the 1737 peace treaty with the British rulers of the island - which is still in force [1] - the Maroons stubbornly resisted conquest.

When the British captured Jamaica in 1655 the Spanish colonists fled leaving a large number of African slaves. Rather than be re-enslaved by the British, they escaped into the hilly, mountainous regions of the island, joining those who had previously escaped from the Spanish to live with the Taínos. The Maroons intermarried with Amerindian natives, establishing independence in the back country and survived by subsistence farming and by raiding plantations. Over time, the Maroons came to control large areas of the Jamaican interior.

Their plantation raids resulted in the First Maroon War. The two main Maroon groups in the 18th century were the Leeward and the Windward tribes, the former led by Cudjoe in Trelawny Town and the latter led by his sister Queen Nanny (and later by Quao).[2] Queen Nanny, also known as Granny Nanny (died 1733) is the only female listed among Jamaica's National Heroes, and has been immortalised in songs and legends. She was known for her exceptional leadership skills, especially in guerrilla warfare, which were particularly important in the First Maroon War in the early 18th century. Her remains are reputedly buried at " Bump Grave" in Moore Town, the main town of the Windward Maroons who are concentrated in and around the Rio Grande valley in the northeastern parish of Portland.

In 1739-40 the British governor in Jamaica signed a treaty with the Maroons, promising them 2500 acres (10 km²) in two locations. They were to remain in their five main towns Accompong, Trelawny Town, Mountain Top, Scots Hall, Nanny Town, living under their own chief with a British supervisor. In exchange, they agreed not to harbour new runaway slaves, but rather to help catch them. They were paid a bounty of two dollars for each returned slave. This last clause in the treaty naturally caused tension between the Maroons and the enslaved black population, although from time to time runaways from the plantations still found their way into Maroon settlements. Originally, Jamaican Maroons fought against slavery and maintained their independence from the British. However, in the treaty of 1738, they were also paid to return captured slaves and fight for the British in the case of an attack from the French or Spanish.

However, when a new Governor took power in 1795 and began to mistreat the Maroons tensions between planters and Maroons grew and a Second Maroon War broke out. The Accompong Maroons remained neutral and the British left them alone. The British fought with 100 Cuban dogs and brought in 5,000 troops. By the end of the war, the other Maroon settlements in Jamaica had been destroyed, and Accompong alone remained. Despite the fact that the Maroons surrendered on the condition that they would not be exported, just a year later 568 were taken to Canada[3].