Ahmad ibn Yusuf Teaches Us Much By His Kindness....

Whenever our Prophet Muhammad encountered a situation, he always look for the opportunity to turn it into a

teaching moment for his companions, that they might glean a clearer understanding of the religion of Islam.  He also want that there be a precedence set for the future generations to come.  One of the first things we learn as Muslim is that non of us truly believe until we want for our brother what we want for ourselves.  Today we are surrounded by narcissism, immediate gratification and the total absence of  any level of altruism.

A few days ago an incident came to my attention  that helped me to begin to believe that there is still hope for humanity.  That there are some individuals, who still have some since of honesty, and self-sacrificing spirit.

A brother in Islam of mine called me with a story that touched his heart and mine also once I heard it.  With that being the case it became necessary to dig deeper to find out more about this individual.

The incident begins with a family attending the "White Coat Ceremony" of one of their children at the Medical College Of Georgia, in  Augusta Georgia.  After the ceremony, they as most family usually after such auspicious occasions, went out to get something to eat.  They ended up at a restaurant  named "Bee Nees".  While eating the waitress came to make sure that all was well with the meal and accommodations.  The manager even came out to see if all was going well, WoW almost feeling like royalty ...then one of the workers, who happened to be Muslim came out to speak.  Introducing himself as Ahmad, so my friend carry on a brief conversation with Ahmad, who seemed to be very happy upon seeing a Muslim family in his restaurant.  After the exchange, Ahmad left and went to the waitress and told her that the Muslim family should not be charged for their desert, that he was going to pay for it out of his pocket.  Keep in mind that our brother Ahmad is earning minimal compensation for his work, but he was willing to pay for the desert of a complete strangers for no other reason that he was a Muslim and traveling. After the meal my friend conferred upon the waitress a very generous gratuity, that left her very happy.  Then he called over Ahmad and continued their conversation, inquiring about his family and what he wanted  to do in the future.  Before leaving he discretely offered Ahmad a small gift of $100.00 for his kindness and concern as a Muslim.  At which time Ahmad replied, "I have done nothing to deserve this gift, and it rightfully belongs to the waitress", and proceed to give it to her, which took her day to the next level. 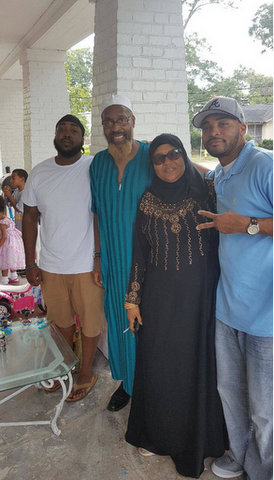 Ahmad With His Family Mother Father And Brother

Here was a young man who makes minimal wages, sacrificing a gift because he did what he did for the pleasure of Allah.  So, who is this young man Ahmad.  After doing some digging we were able to locate him, and we would like to present his story to you today... Ahmad Bilaal Rashada, is an African American Muslim, born and raised in Augusta, Ga. He is the last of eight children.  His mother is Mrs. Deborah Rashada, and his father is Mr.  Joseph (Yusuf) Rashada.  During is early years Ahmad attended Barton Chapel Elementary  School for pre-k.  After completing pre-k he continued his education at Joseph R. Lamar for kindergarten through 5th grade.  Ahmad also attended Tubman middle school from 6th through 8th grade.  Upon completion of his 8th grade he attended Richmond Academy where he graduated high school.  After high school Ahmad traveled to Malaysia University in Malaysia for a 2 month exchange study program.  Presently Ahmad is employed at the Bees Knees Restaurant, where this story began.  Ahmad's goal in life is to establish a Muslim enterprise that could provide better opportunities for struggling Muslim brothers and sister...again thinking of others over make money and becoming rich.  At the end of the day Ahmad is already rich, and is depositing his assets in his account for the hereafter...may Allah help and protect this young striving Muslim.... At the end of the day, most people remember very little of what you say to them, but they always remember how you make them feel....Everyone is important!

From Ahmad:  " Alhumdulilah, I received the article, it really does great justice for the heart.  I really appreciate the opportunity to make my parents happy.  I ask Allah to bless us to be successful in this life and the next...Ameen"

Shukrun, for sharing something positive about this young brother, May Allah continue to bless and guide him

with the best Iman.  This is the type of character that we want all our youth and adults to display.