In September 1982,Israel invaded Lebanon to finish off the Palestine Liberation Organization which had 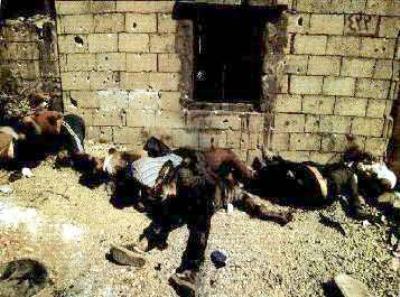 established itself there. The result was the slaughter of thousands of unarmed and innocent Palestinian civilians who were driven out of their homes and lands by Israelis and living in refugee camps in appalling conditions.

This genocide was committed by Israel with the support of the so called champions of human rights in Washington, London, Paris and other European capitals while Middle East rulers turned blind eye.

The irony is that the anniversary of this genocide does not attract any attention in the Western media, which remains integral part of Western war machines, as the mysterious 9/11 tragedy in New York.

Describing the invasion Maureen Abdullah said ‘as Beirut was bombed by air, land and sea, people throughout the world watched the wanton act of destruction unfolding beneath the relentless gaze of television. Within five days 8000 people, 2000 of them in Sidon alone, were killed by Israeli invading forces .

According to the Red Cross 14,000 civilians killed and 20,000 wounded during the first two weeks . A total of 12,000 men, women and children were killed in Tire, in the Palestinian refugee camps at Rashidiya, Bourj Al Shemali and Al Bass. But the most horrific toll of casualties was in the Muslim areas of West Beirut where 2,461 were killed by the Israeli raids which also killed hundreds of others in many villages along the Litani River.

Robert Fisk, the reputed British journalist, who covered the war said in his book Pity The Nation, that most of the victims were Muslims and on the edge of Sabra, the Muslim cemetery was so crowded with dead from the Israeli raids that corpses were being buried thirty feet deep in mass graves, one on top of the other. The bodies in decay are disgusting. The smell of human remains in 100 degrees of heat nauseating and it contradicts our most deeply held values - love, beauty, gentleness, health, cleanliness, hygiene and life. Both physically and mentally that stench was the manifestation of our fear and revulsion.When we first walked down the stairs of the Sidon elementary school, where refugees from Tire found shelter, were bombed by the Israelis , we faced the smell of those men, women and children killed. Why did they die here? How could such an abomination have taken place?

He added that “as if the carnage by air raids were not enough the Jews began using the US supplied destructive cluster bombs against West Beirut where the mournful exodus of citizens continued No food was allowed in and the Israeli troops even grabbed baskets of food from Muslim women and threw them into the ditch.

Describing the Israeli cruelty even in hospitals Dr. Amal Shamma of the Beirut Hospital said “after the Zionists fired phosphorus shells in West Beirut on 29 July, I had to take the babies and put them in buckets of water to put out of flames. When I look them out half an hour later, they were still burning. Even in the mortuary, they smouldered for hours”.

Journalist Jim Muir described the invasion as an Israeli American double act, working in partnership, with the Americans trying to reap the fruits of the Israeli invasion.

Condemning the crime three prominent Jewish figures, Nahum Goldman, Philip Klutznick and Pierre Mendes, said the main responsibility for chaos in the Middle East was with the US because of its military and economic aid to Israel.

Battered and beaten the PLO was evacuated from Beirut following written American guarantees from US envoy Philip Habib assuring the safety of the families of the PLO fighters. But these guarantees later turned out to be death warrants as their families were slaughtered at Sabra –Chatila refugee camps after they left.

Robert Fisk, accompanied by two more journalists Loren Jenkins, an American, and Tveit, a Norwegian, who visited the camp had this to say of the mass killing:

“All of us wanted to vomit. We were breathing death, inhaling the very putrescence of the bloated. There were women lying in houses with their skirts torn up to their waists and their legs wide apart. Children with their throats cut, rows of young men shot in the back after being lined up at an execution wall. There were babies - blackened babies because they had been slaughtered more than 24 hours earlier and their small bodies were already in a state of decomposition - tossed into rubbish heaps alongside discarded US army ration tins, Israeli army medical equipment and empty bottles of whisky. Walking across the muddy entrance of Chatila we found that buildings had all been dynamited to the ground. There were cartridge cases across the main road and Israeli flare canisters still attached to their tiny parachutes. Clouds of flies moved across the rubble, raiding parties with a nose for victory.

Down the lane way there laid a pile of corpses: young men whose arms and legs had been wrapped around each other in the agony of death; all had been shot at point blank range through the cheek, the bullet tearing away a line of flesh up to the ear and entering the brain. Some had vivid crimson or black scars down the left side of their throats. One had been castrated, his trousers torn open and a settlement of flies throbbing over his torn intestines. The eyes of the young men were all open. The youngest was only twelve or thirteen years old and the bodies began to bloat in heat. On the other side of the main road we found the bodies of women and several children. The corpse of the middle aged women lay draped over a pile of rubble. One lay on her back, her dress torn open and the head of a little girl emerging from behind her. Another child lay on the roadway like a discarded doll, her white dress stained with mud and dust. She could not have been more than three years old and her head been blown away by a bullet fired into her brain. One of the women also had a tiny baby to her body and the bullet that had passed through her breast had killed the baby too. Someone had slit open the woman’s stomach, cutting sideways and then upwards, perhaps trying to kill her unborn child. Her eyes were wide open, her dark face frozen in horror.

They saw a young, pretty woman lying on her back as if she was sunbathing in the heat and the blood running from her back was still wet. The Israeli backed murderers who raped and knifed the woman have just left. Between September 16 and 18 more than 2,000 men, women, children and the aged were massacred in Sabra and Chatila.

Shocked by the crime many countries asked how the Jews who have suffered so terribly under Hitler could be so heartless to commit such atrocities.

The two main architects of this genocide were Israeli Prime Minister Menachem Begin and his Defence Minister Ariel Aharon. Despite their crime against humanity Menachem Begin was awarded coveted Nobel Prize while Ariel Sharon, elected as Prime Minister, was received with great affection by former US President George Bush, also drenched in the blood of innocent Iraqi, Afghan ,Palestinian and Somali Muslims, as a Man of Peace. There were no United Nations sanctions as such.

No one including the Arabs do not observe the anniversary of this genocide.

Instead quarter century later Israel committed equally worse genocide in Gaza with the support of US led.

And these are the champions of human rights accusing smaller nations like Sri Lankan of war crimes. And this is the United Nations which took no action against Israel.Ends