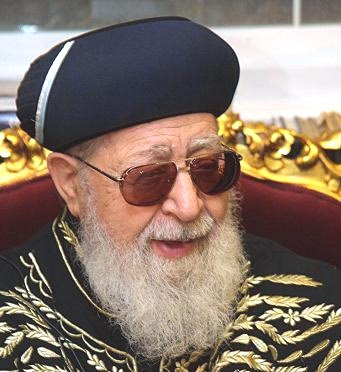 leader with a plague, calling for their death in a fiery sermon before Middle East peace talks set to begin next week.

"God should strike them and these Palestinians -- evil haters of Israel -- with a plague," the 89-year-old rabbi said in his weekly address to the faithful, excerpts of which were broadcast on Israeli radio Sunday.

Prime Minister Benjamin Netanyahu distanced himself from the comments and said Israel wanted to reach a peace deal with the Palestinians that would ensure good neighborly relations.

"The comments do not reflect Prime Minister Benjamin Netanyahu's view or the position of the government of Israel," Netanyahu's office said in a statement.

The United States said Yosef's comments were "inflammatory" and an impediment to peace efforts.

"As we move forward to relaunch peace negotiations, it is important that actions by people on all sides help to advance our effort, not hinder it," State Department spokesman P.J. Crowley said in a statement.

The Iraqi-born cleric has made similar remarks before, most notably in 2001, during a Palestinian uprising, when he called for Arabs' annihilation and said it was forbidden to be merciful to them.

He later said he was referring only to "terrorists" who attacked Israelis. In the 1990s, Yosef broke with other Orthodox Jewish leaders by voicing support for territorial compromise with the Palestinians.

Saeb Erekat, the chief Palestinian negotiator, said Yosef's latest comments were tantamount to calling for "genocide against Palestinians." The rabbi's remarks, he said, were "an insult to all our efforts to advance the negotiations process."

Arriving at Netanyahu's office for a weekly cabinet meeting, Deputy Prime Minister Eli Yishai of Shas declined to comment when asked by reporters about Yosef's sermon.

Netanyahu and Abbas are due to resume direct peace talks in Washington Thursday, the first such negotiations in 20 months in a peace process that commits both sides to avoid incitement, which has included anti-Jewish sermons by Palestinian clerics.