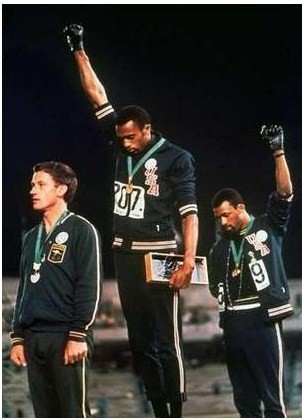 In '68, Olympians Tommie Smith and John Carlos raised their fists for racial justice

medalist John Carlos stood in stocking feet on the victory platform, bowed their heads during the U.S. national anthem and shot black-gloved fists to the sky.

They meant their unshod feet to represent black poverty, Smith's black scarf and Carlos's beads to signify black lynchings, their fists to mean black unity and power. Any resemblance to Lady Liberty lifting her torch was ironic, for Smith and Carlos were taking U.S. society to task for having failed to extend liberty and justice to all.

The tableau was riveting and grim. Most of the 80,000 spectators in the Olympic Stadium seemed mystified. Over some applause there were boos, catcalls. "Those singing the anthem," Carlos remembers, "started screaming it out." As he left the field, it seemed to Smith, who had just set a world record of 19.83 seconds, that he saw the fangs and yellow eyes of wild animals. "Homo sapiens with hate in its face," he would say. "I threw my arm up again and said, 'Please, God, get me out of here.' "

He was delivered into a whirlwind of reaction. Smith repeatedly said that he loved his country and simply wanted it to be better. "It was not a gesture of hate," he said. "It was a gesture of frustration." Then he and Carlos were suspended from the U.S. Olympic team and thrown out of the Olympic Village.

In the 23 years since, Smith has, by necessity and by his own inclination, kept a low profile. He played on the taxi squad of the Cincinnati Bengals for three years. He was widely shunned. "All I had left for me was my education," he says. He took his master's in sociology from the Goddard-Cambridge Graduate Program for Social Change in Cambridge, Mass. He taught sociology and coached track and basketball for six years at Oberlin College in Ohio. And for the last 14 years he has taught sociology and coached track at Santa Monica College in California. He advised athletes who sought him out. A photo in his cell of an office in Santa Monica is inscribed, "To Tommie, national hero, from a protégé!" It is signed by Edwin Moses.

Yet Smith is not a public man. Save with friends or those certified by friends, he has rarely discussed the events of which he is indelibly a part. "Tommie's almost reclusive," says UCLA sprint coach John Smith. "He could teach white America a lot if he weren't so remote."

On Smith's wall hang a pair of California State Assembly resolutions commending him for church and community work. Smith's post-Olympic life has established that his gesture was neither self-promoting nor nihilistic. His was an act of conscience, so it is only to his conscience, that of a scholar, that we may appeal.

Thus it is put to him that any account of how this nation came to accept the civil rights of African-Americans remains incomplete without his dramatic two cents worth.

Smith is affected. "What I did grew directly out of my education as an American," he says. "So I guess I can't refuse to contribute to others'."

His words, once loosed, flow with such force and organization that it is clear they have been waiting for decades, lining up, pressing against the dam. Too, it happens that Smith has the journeys of his youth preserved like peaches in brandy. He can lean back, take a sip of memory, and everything comes over him, freshly afire.