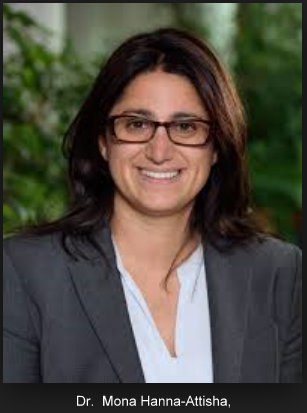 Hanna-Attisha’s public health advocacy efforts help drive policy change, establish comprehensive health support for families impacted by lead exposure, and heighten national awareness of the presence of lead in America’s water supplies    PITTSBURGH, September 14, 2017—The Heinz Family Foundation today named pediatrician and public health advocate Mona Hanna-Attisha, M.D., the recipient of the 22nd Heinz Award in the Public Policy category. Dr. Hanna-Attisha is recognized for stepping forward to expose the presence of elevated lead levels in children residing in Flint, Michigan; for her work establishing a system of comprehensive care and support for children and families affected by lead exposure; and for her efforts to ignite a renewed nationwide conversation about lead exposure and drinking water safety.  As part of the accolade, Dr. Hanna-Attisha will receive an unrestricted cash award of $250,000.

Lead has a profound impact on unborn children and those ages six and younger, whose brains are still being formed. Exposure to lead causes irreversible brain damage, developmental impairment, speech problems and an increased risk for behavioral issues, with lifelong consequences. In September 2015, Dr. Hanna-Attisha, Director of the pediatric residency program at Hurley Medical Center in Flint and Associate Professor at Michigan State University College of Human Medicine, called a press conference to ensure that the research findings she was about to reveal regarding lead levels in local children would be heard.   City residents had been complaining about pungent brown water flowing from their faucets since the previous year, when Flint changed its water source from Lake Huron to the Flint River. State officials consistently maintained that the water was safe, but Dr. Hanna-Attisha was unconvinced, having studied findings by leading lead researcher and Virginia Tech civil engineering Professor Dr. Marc Edwards indicating that the untreated Flint water was 19 times more corrosive than water that had previously been sourced from Lake Huron. Dr. Hanna-Attisha chose to analyze data on 2,000 pediatric patients before and after the switch. The results of her research were stunning, showing that the percentage of children with elevated levels of lead in their blood had almost doubled since the switch, and even tripled in certain neighborhoods.   Recognizing that this represented a public health emergency, Dr. Hanna-Attisha chose to go public with her findings, only to have state government officials initially attempt to discount her research and credibility. However, the public outcry and national media attention generated by her findings forced the state to reevaluate its data, subsequently resulting in state of emergency declarations by both Michigan Governor Rick Snyder and President Obama. Dr. Hanna-Attisha has since remained a central figure in efforts to change public health policy on a local and national level, and to meet the needs of children and families impacted by lead exposure. In 2016, she
Heinz Awards News Release – p. 2

was appointed Director of the newly created Pediatric Public Health Initiative (PPHI), an interdisciplinary collaborative effort between Michigan State University and Hurley Children’s Hospital. This innovative model public health program works to provide tools, resources and interventions for improving the health and development of children affected by lead exposure, and will monitor children and families in the years ahead to assess the effectiveness of those interventions.  “With PPHI, we are actively trying to flip the story for our kids,” said Dr. Hanna-Attisha. “We are doing work that hasn’t been done before. We very much know what lead does—that science is there. We know what it does to cognition, to behavior, to criminality and to life outcomes, and leaning on the field of developmental neuroscience, we are proactively intervening to preserve the tomorrows of our children.”   “Everyone in Flint—community partners, moms, kids, nonprofits—is rolling up their sleeves to make sure that our kids turn out okay, and really better than okay. We have been able to establish free, yearround childcare. We are the only city to have universal preschool. We have Medicaid expansion, we have mobile grocery stores, we have breastfeeding services, mental health support and positive parenting programs.”   “My kids in Flint continue to be the inspiration for this work. They did absolutely nothing wrong other than to live in an almost bankrupt city that was under state emergency management, where the focus was cutting costs rather than children’s health. As a pediatrician, it’s my job to be an advocate for my patients, to protect and speak up for kids, because they can’t. That’s the privilege and honor of what I do every day.” Dr. Hanna-Attisha is also coordinating the establishment of a registry to track the impact of these interventions on the health of Flint’s children for decades, and is a member of the recently formed Child Lead Poisoning Elimination Board, which focuses on preventing lead exposure for all of Michigan’s children. In November 2016, the board released a blueprint with more than 100 recommendations for Michigan to initiate in order to prevent lead exposure. Recommendations include the mandatory testing of all children for lead poisoning, expanded home testing requirements and the creation of a statewide database of structures with dangerous lead levels. As an outgrowth of these recommendations, in March 2017, Governor Snyder announced the creation of the Child Lead Exposure Elimination Commission, an effort that will continue the state’s fight against lead exposure. Dr. Hanna-Attisha was also appointed to this 15-member commission, for which she will serve a three-year term and represent physician interests.  “We are honored to present this year’s public policy award to Dr. Hanna-Attisha, who in her fight to protect the children and families of Flint has embodied the qualities of courage, wisdom, compassion and grit,” said Teresa Heinz, Chairman of the Heinz Family Foundation. “Her unrelenting effort as a champion for truth, her continued advocacy work on behalf of those who will suffer the effects of lead exposure for years to come, and her commitment to making unsafe drinking water an issue of our nation, exemplify the tremendous impact that one citizen activist can have on our world.” Established to honor the memory of U.S. Senator John Heinz, the 22nd Heinz Awards this year recognizes those who have made significant contributions in five distinct areas of great importance to Senator Heinz: Arts and Humanities; Environment; Human Condition; Public Policy; and Technology, the Economy and Employment. The Heinz Awards has recognized 133 individuals and awarded more than $26 million to the honorees. For more information about the awardees visit http://heinzawards.net/2017. ;

EDITORS/REPORTERS: To obtain photos of Dr. Hanna-Attisha or any of the other recipients, please contact Abby Manishor at amanishor@burness.com or 917-539-3308. # # # About the Heinz Awards Established by Teresa Heinz in 1993 to honor the memory of her late husband, U.S. Senator John Heinz, the Heinz Awards celebrates the accomplishments and spirit of the Senator by recognizing the extraordinary achievements of individuals in the areas of greatest importance to him. The awards, administered by the Heinz Family Foundation, recognize individuals for their contributions in the areas of Arts and Humanities; Environment; Human Condition; Public Policy; and Technology, the Economy and Employment. Nominations are submitted by invited experts, who serve anonymously, and are reviewed by jurors appointed by the Heinz Family Foundation. The jurors make recommendations to the Board of Directors, which subsequently selects the Award recipients. For more information on the Heinz Awards, visit www.heinzawards.net. Contacts: Abby Manishor      917-539-3308      amanishor@burness.com
Kim O’Dell      412-497-5775      kodell@heinzoffice.org